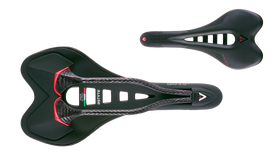 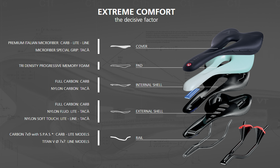 Sky range, which is further divided into the Skycarb, Skylite and Skyline combinations of shell, base and rail. There’s a choice of two widths in each, plus or minus a central groove.

Despite its carbon rails and high price tag, the Skylite is actually far from the most expensive in Astute’s saddle lineup. It features a nylon/carbon internal shell in a nod to cost-saving, but at least it’s in a place it won’t be noticed – from a visual point of view, at least.

What you’re really paying for in the top models, however, is weight – or rather the lack of weight.

Italian-made microfibres cover the three-density foam underneath. Being a ‘memory’-type foam, it has a comparatively slow yield when you first sit down. As a result, it feels on the firm side initially and while it does become nicely conformed within a minute or two, it takes a few rides to get accustomed to.

At the same price!